What are the Questions that Drive Us 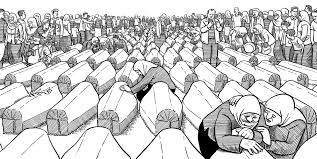 Yesterday I had the pleasure of attending a lecture by Joe Sacco at our institute. He was invited to talk about his career as political cartoonist for students of the department of Illustration.

Joe Sacco is born in Malta, went to Australia at the age of 3, and moved to Oregon Portland at the age of 12. He did not attend an art academy, but instead studied journalism. His desire was to become a foreign correspondent, but he found out it wasn’t that easy. After doing some ‘small-jobs’ for large cooperation’s, he decided to move to Berlin at 28. He made his living by doing artwork for bands.

Interested in the conflict in the middle east he decided to make a bold step. He took a plane to Cairo and move to Gaza by bus. A trip which now is no longer possible. During his stay of more than 2 months he went to meet with Palestinians and asked them about their stories. This was published in 1969 as “Palestine”.

Sacco was not trained in comic books, but he had always been fond of drawing. “Where most young people stop with drawing around 14-16 years; I decided to keep doing it”.  Sacco explains he only uses the computer to scan his works. “I like the sound of my pen scratching the board, and try to avoid looking at screens as much as I can”. He uses pen & ink, and doesn’t work much with preparing an overall composition. He explains he loves the tension of not really knowing in advance where his work will take him.

In his earlier work his characters were depicted in a free- and cartoony manner. Throughout his work the depiction of people became more representational. He explained: “even though I like drawing cartoon-characters, the story I was telling needed more representational depiction of humans. It became less what I like doing for myself, and more about what I can do to support the story”.

The output of his Gaza-project developed in a series of related projects in which he went to war-torn places such as Sarajevo and the Gulf war. When a student asked about how did he arrange funding, and if he wasn’t scared he replied; “funding is very difficult, sometimes I had to borrow from my parents”. Once his work was picked up it became a little easier; publishers would give him an advance to work with. Fear was something that was always there. “You would be crazy not to be scared in these places”.

He didn’t go to Gaza because he believed it would be a ‘lucrative-investment’, and to a certain extend he was aware of the dangers. He explained he felt he had to go, despite the risk and challenges. He felt the urgency to listen to the stories, as gruesome as they could be, and share them through his drawings. His initial question for his Palestine-project was: “I wanted to know how it was for people to live under occupation”.

I hope the academy can be the place where students have time and space to explore the questions that drive them.